In this post I wanted to share something with you that I’m really proud of being involved with. It includes two very talented Gaelic gentlemen, a band I listen to on repeat, the haunting vocals of Kathleen MacInnes and some of my most favourite places.

The awesome thing about living on this island is that there’s always something fun and creative going on, you never know what you’ll get up to from one week to the next…

I’ll begin by letting you know about three things that I love:

-Skye
-The water
-Music by the Skye-grown band Niteworks

So, when Dòl Eoin, a talented filmmaker I’d met on the set of Bannan, offered me the chance to take part in the band’s new video there was no way I could refuse. 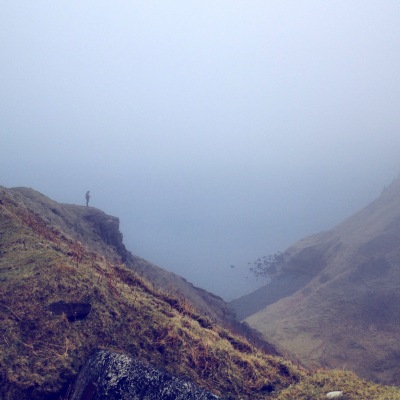 Dòl Eoin scouting out the locations around Lealt Falls, where the protagonist climbs away from the waterfall

The words of ‘Maraiche’ are sung in Gaelic and they tell the tale of a woman who has lost her love to the sea.
Dòl Eoin’s vision for the video begins at a Niteworks gigwhere we see her catch a glimpse, or maybe just a memory, of her departed sailor as she becomes entranced by the music. Chasing this vision she races through the streets of Glasgow and we follow her and her memories, Alice In Wonderland-style, towards the sea…

We began filming in familiar Glasgow spots (Ashton Lane, the Tradeston Bridge) then moved on to some of Skye’s most-loved locations; Neist Point, The Fairy Pools, Lealt Falls….
I only had about a week before I was due to leave for Eden and we had multiple locations to shoot in over a number of days so it was a race against time.

At the Fairy Pools. Dòl Eoin sets up the camera whilst Calum looks on.

My ‘lost sailor’ in the video is someone who loves the water even more than me.
If you live in Scotland and use social media you’ve probably already seen Calum Maclean.
The video of a nutter swimming through a high-altitude icy loch? That’ll be Calum. The naked bum disappearing behind a magnificent waterfall? Probably also Calum. If you haven’t already seen him, look him up, his short videos for BBC Scotland’s The Social are well worth a watch.

They may be a Caribbean blue but the Fairy Pools in March aren’t the warmest of waters (in fact, they’re equally freezing in the summer months too…)
Tourists looked on in confusion whilst, fully clothed, we ducked under, fell off ledges and attempted to film an underwater kiss.
When we finally finished I realised I couldn’t have done much longer. I shuddered big, involuntary juddering shivers and I slid and stumbled down the muddy track back to our cars with limbs barely working -a mild case of hypothermia that was cured by a few hours in a warm pub!
It was worth it though, the aquamarine water of the Fairy Pools made a stunning backdrop to the music.

A picture rudely swiped from Calum’s Instagram (sorry @caldamac!) It was as chilly as it looks but I love the yellow against the turquoise of the Fairy Pools

Whilst I’m obviously biased, I think Dòl Eoin captured the spirit of ‘Maraiche’ perfectly. I’m was chuffed, still am chuffed, that he’d choose me to work with.

Of course, I didn’t get to see the finished video until I’d left Eden earlier this year but I was thrilled to finally watch it (though I often sat on those Ardnamurchan sand dunes humming Niteworks tunes to myself as I watched the tide go out)

If you’d like to watch it too, you can find it here: Niteworks – Maraiche (feat. Kathleen MacInnes)

A still shot at Lealt Falls

To learn more about Niteworks and hear the rest of the album visit their webpage niteworksband.com