The week before I planned to leave for Skye was probably the busiest I’ve had all year. A multitude of family birthdays, work meetings and social events meant that some days were literally planned down to the hour. Getting everything done and everyone seen before I left meant that packing was pushed to the wayside until the day before I was due to go.
Luckily, not knowing where I’d be or what I needed meant that it didn’t take long to pack up the car. Anything I’d forgotten could be sent on or bought later.

I planned two days for driving as I can barely drive for an hour without getting sleepy:
Leg 1: Chiddingfold to New Lanark, 7 /12 hours.
Leg 2: New Lanark to Skye via Fort William, 5 1/2 hours.

There’s something quite satisfying about driving straight North, an easy route, no map, but really there’s nothing exciting to say about a 7 hour journey up the M6…
Apart from one moment when I passed through the Lake District and the sun began to set. Some characteristically moody song by London Grammar came on the radio as the pelting rain began to let up. A deep amber light washed across the landscape and a rainbow appeared above the carriageway. It was a bit silly but it was a beautiful moment. It hadn’t hit me until then that I was embarking on quite a big adventure.

It was dark by the time I got to my overnight stop, the working village of New Lanark. It’s an incredible place, an old cotton mill settlement that’s now a UNESCO Heritage Site.
I was booked into the New Lanark youth hostel, one of many fantastic places run by the SYHA. When I travelled across Scotland last September I chose to stay in hostels so that I could afford to splash out on Michelin meals and special experiences. I may have paid pennies for a bed but many of these hostels were simply amazing buildings to stay in; an old schoolhouse, a hunting lodge and a climbers cabin are just a few of the properties they run. New Lanark is definitely up there with their most interesting: 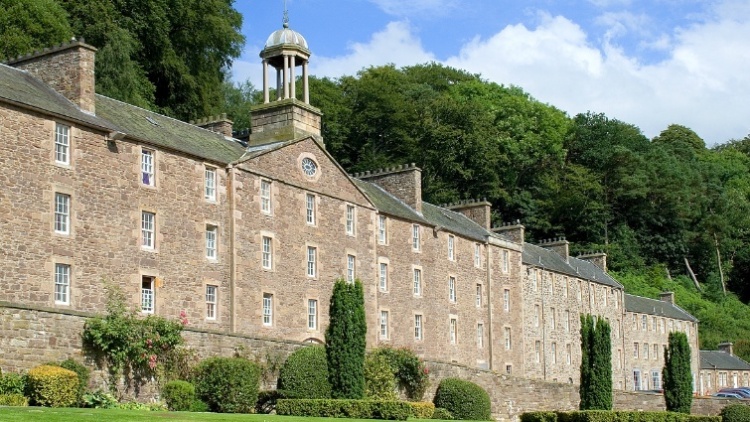 I was up early the next day to travel through the Trossachs to Fort William. Yesterday’s drive was dull and grey but this one took me through dramatic scenery, along lochs and through glens. I had to work hard to concentrate on the road when my eyes wanted to follow the sweeping slopes of the hills up into the clouds. Driving through Glencoe and then the Great Glen is surely the most wonderful way to be introduced to the Highlands and Islands.

After a couple of hours I’m driving over the bridge to Skye from the Kyle of Lochalsh. The island welcomes me with characteristic grey drizzle, a moody hello. It takes an hour to drive to the main town of Portree and I scope out every business and road sign in case it comes in handy later. The signposts and caravans gradually give way to greenery and rocky coastlines as I push further North until I arrive at the harbour. So, this is home.