(This post is long overdue… I have been living in the North End for three weeks now. Yet each time I’ve tried to write about moving day something has happened, my computer crashes or the post won’t upload. Very frustrating but here’s one last try!)

After spending over 10 days hostelling and B&B-ing in Portree I was beginning to get weary of living out of bags, having limited kitchen access and needing to put on trousers to go to the bathroom.
Moving day couldn’t come soon enough.
Of course there was the added excitement of moving into my own place where I could wake up in the mornings and make friends with the new day by gazing out to the sea with a cup of tea. After all, Portree is lovely but I came here for the natural landscapes, not urban living.

So, just over a week ago, I stuffed my belongings back into their bags and hauled them into the car. On the way I stopped off for supplies and some flowers for my lovely landlady and then I was on the road.

Despite the postal address containing the line ‘Near Portree’, the house is a good 45 minute drive from Skye’s main town (or more, if the sheep have decided to park themselves on the road).
This distance was a big negative when I first started househunting. But then I made the journey… It’s probably one of the most spectacular routes I’ve ever driven.
It’s pretty much just a tour past the natural icons of Skye; The Old Man of Storr, Kilt Rock and the Quairang. The weather and the hour make it look completely different from one day to the next and driving this route has become one of my favourite parts of the day.

The drive along the A855 past The Old Mann Of Storr

Back in the car I cranked up the music, put my sunglasses on and wound round the bends with the hills on one side and the ocean on the other. The sun was shining and the sea and sky were a vivid blue; much better than the grey drizzle of the previous day.

As I  turned onto the little road up the house I had to stop.
Sitting on the middle of tarmac in front of me was a bright-eyed collie dog. As I braked to a halt it got up and turned, then looked back over it’s shoulder at me. I inched the car forward and it began to trot along ahead of me. After a short distance I halted again in case it wanted to get out of the road and go back past the car. It stopped too, sat down again and looked at me. I started again and so did the dog. I followed it with amusement, this curious dog seemed to be leading me home.

As I crawled the car along the track I glanced up the hill towards the house.
On the cloud-shaded landscape I saw my new home sitting in a little spotlight of sunshine. It looked as if someone had put a light on to show me where to go. It felt welcoming.

And so I followed my little canine guide up to the only sunny patch in the bay; it was a curiously charming start to life in the North End and I got a little feeling that this kind of thing isn’t unusual here.

The keys were in the door as I got to the house. I meandered through each room and tried to take it all in. This is the first place I’ve ever lived on my own; no family, no housemates, no boyfriend. Just me.
I could make this space mine. An Englishman’s home is his castle, or something like that…

I quickly noticed that Patsy had put a great deal of effort into preparing the place for her new tenant; the main bedroom was all made up with sheets and there were even fresh teatowels in the drawers and new pots and pans in the cupboards. But the thing that touched me the most was the main fireplace.
When I had first called about the house I had asked if there was the option to have a real fire, I had said that I know it’s a minor thing but that it’s important for me to have a fire to curl up in front of during the winter months. Patsy had agreed, saying that we all need our home comforts. Today I found the fireplace ready set with a bucket of coal, some long matches and even a couple of candles from the Isle of Skye Candle Co. Out in the utility room there was a further bucket of coal, kindling and firelighters.

The amount of care and attention that Patsy had put into making the house feel homely really touched me. It was my first taste of the kindness that a lot of people have up here. I knew that I’d made the right choice to choose this place to live.

Only having a small carful of bags meant that unpacking was unusually speedy.
I didn’t put everything away immediately though. You never know when the sun might be shining again so, after saying hello to Patsy and her husband Donald, I took the opportunity to go out and explore. 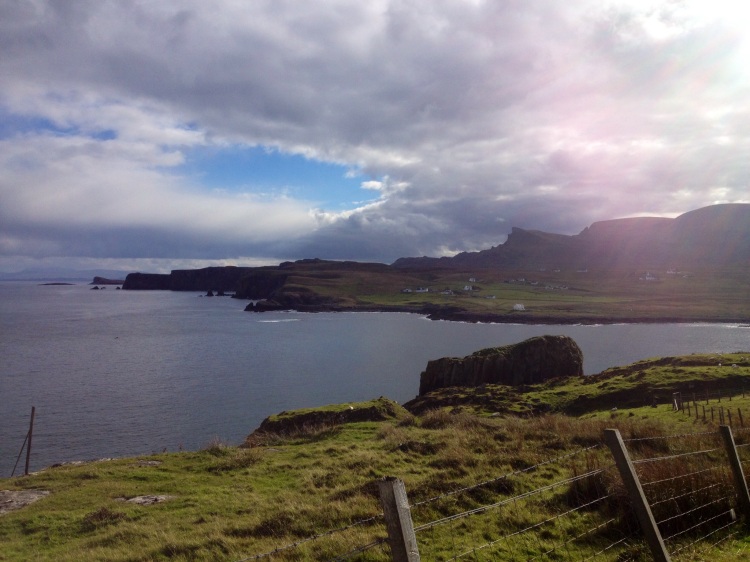 Looking over the bay from the clifftop path 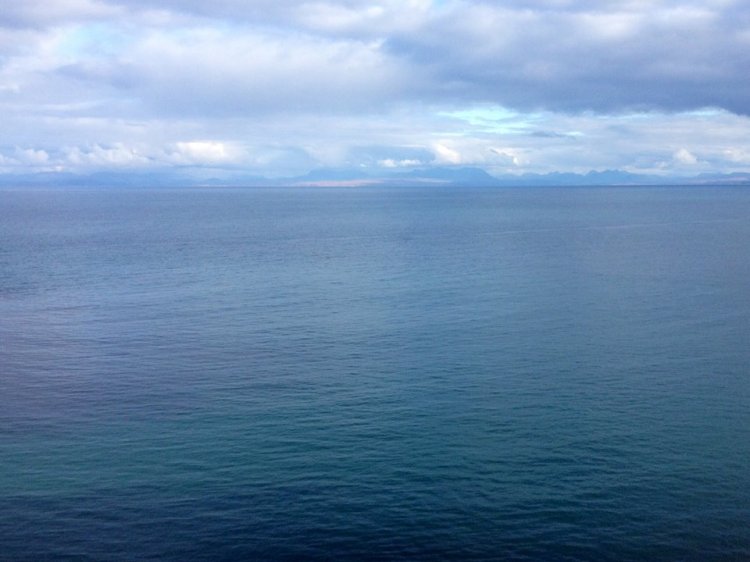 Straight out to sea, one of my favourite views

On my first visit I’d noticed a little rocky beach on the edge of the bay just a little further North of the house. I’d go and check that out.

It wasn’t quite as simple as I had expected, as I crossed the fields I realised that I needed to find my way down a vertical craggy rock face first. In the end I found a sheep path that ran along the cliff the zigzagged down a less precipitous part of the rock.
If in doubt always follow a sheep path; they may seem stupid but they’re good navigators. Just make sure it’s a sheep you’re following and not a mountain goat… 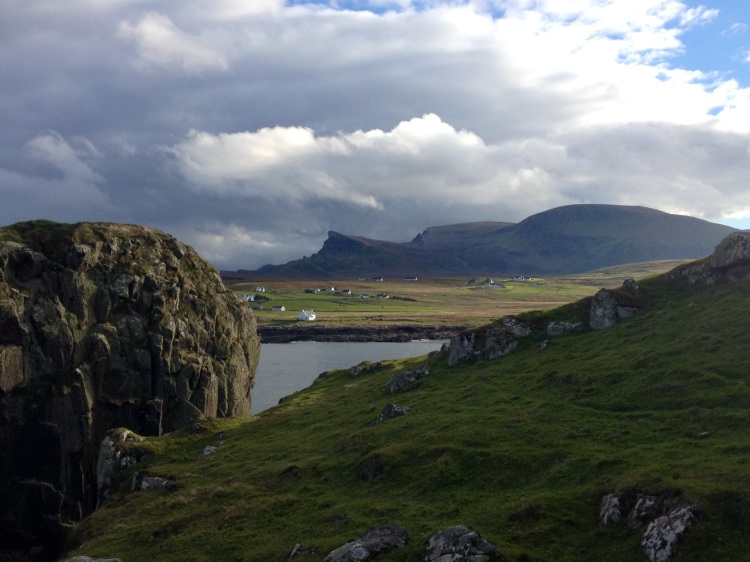 Walking along the cliffs on the sheep path

It was worth the effort. I picked my way over rockpools containing shells, fat ruby sea anemones and tiny darting fish. The only sounds were the lapping of the waves and the songbirds in the grass. It was like my own private beach.
I sat for a while and thought of how busy and stressed I’d been in the months before I came here. Now I have time to sit on a rock and do nothing but stare out to sea and enjoy the peace. 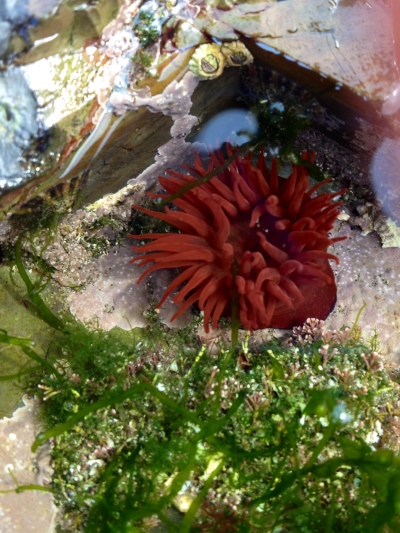 Shells amongst the rocks

Of course, the peace here isn’t constant. Today is calm but I’ve been told about a fisherman who was washed off the rocks metres from where I sat. He was dragged out to sea and never seen again. It’s a tragic thing to happen but it doesn’t seem to be uncommon around here (I’ve heard other similar stories)
This isn’t a place to be underestimated.

Sitting on the rocks looking out over the bay

Eventually I head back and begin to unpack into my new home. I couldn’t (still can’t) help but keep stopping to look out of the windows at the view.

As the sun began to set over the sea I pulled a chair over to the window and popped open the little bottle of champagne that I’d brought especially.
With a silent cheers I drank to my new home and wondered what adventures would lie ahead…