Sometimes I wonder if I’m just hearing things. Despite the drumming rain and howling winds of last night, I found myself waking up to beautiful blue skies again today.

I had a couple of letters to send so I hopped in my car and drove West towards Uig, the nearest settlement with a Post Office.

As I rounded the top of the road at Duntulm I pulled over. Despite my address actually being ‘North Duntulm’ I’d never visited the old castle ruins that the area is known for. I wasn’t in a hurry so I walked along the cliff to have a wee snoop around.

Duntulm Castle stands on an impressive cliff-like piece of basalt that juts out into the sea. It used to be the seat of the clan MacDonald but there’s not much left of it now (I’m not surprised now I know how fierce the weather can be here)
It was interesting enough but I didn’t stay long. 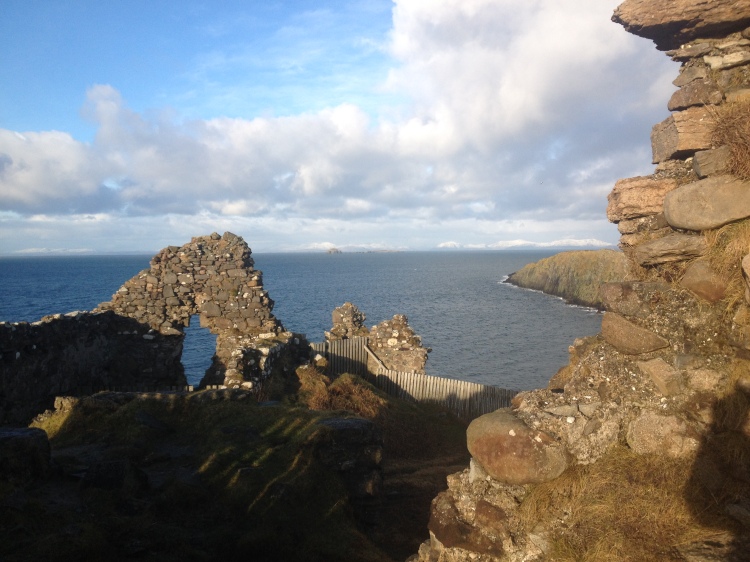 ‘Inside’ Duntulm Castle. You can see the snow-covered mountains of the mainland in the distance

The road into Uig winds down from a high hill. I noticed some tourists taking pictures from a passing place halfway down and I stopped to join them. It’s a nice enough harbour/bay but I’ve never paid it any special attention. Today it looked quite lovely in the sunshine with the snowy hills behind.

After posting my letters I decided to check out the Fairy Glen (obviously in a dawdling, exploring kind of mood today!)

Yet another Fairy-centric feature on Skye, the Fairy Glen is a little place a couple of minutes South-East of Uig which is famous for it’s unusual landscape. I’ve never been before but it’s firmly on my To Do list.

The clear, green hills turn into snowy hillocks as I come into the glen. The road winds right through it and it’s instantly recognisable by these funny little cone-shaped, turf-stepped mounds. You can tell it’s got the same kind of strange geological makeup as the Quiraing; only in a kind of cutesy-miniature.

Driving into the Fairy Glen

I’m the only person there and as I get out of the car the only sound I can hear is my sturdy Muck Boots crunching on the ice-hardened snow.
There are no other footprints here and everything is hushed. As I walk back along the road I find myself breathing extra softly and carefully so as not to disturb the peace.

Still calm. The flat-topped peak on the right is the Fairy Castle

I find myself at a lochan with a mirror-like surface. There’s an absolute stillness here, barely even a breeze.
I’m pleased that I’ve come here in winter whilst it’s like this; so that I can have it to myself before the tourist hordes descend.

From here I meander my way round the ponds and bushes up towards Castle Ewen, also known as the Fairy Castle. The tallest part of the glen, It’s the natural rock formation that stands proudly overlooking the pond in my pictures above.

The Fairy Castle from the West

As I amble my way up I hear something other than the satisfying *crunch* *crunch* of snow under my feet.
It’s such a hushed sound that it’s almost inaudible, a mellow whooshing noise. The best way I can describe it is as an incredible softness.

As I turn to look down I see a heron gliding over the pond. As it nears the bank it follows the incline of the little hillocks, tracing the shape of the landscape. It swoops round, up, over another and another before following the road round the corner and out of the glen. It was mesmerising. 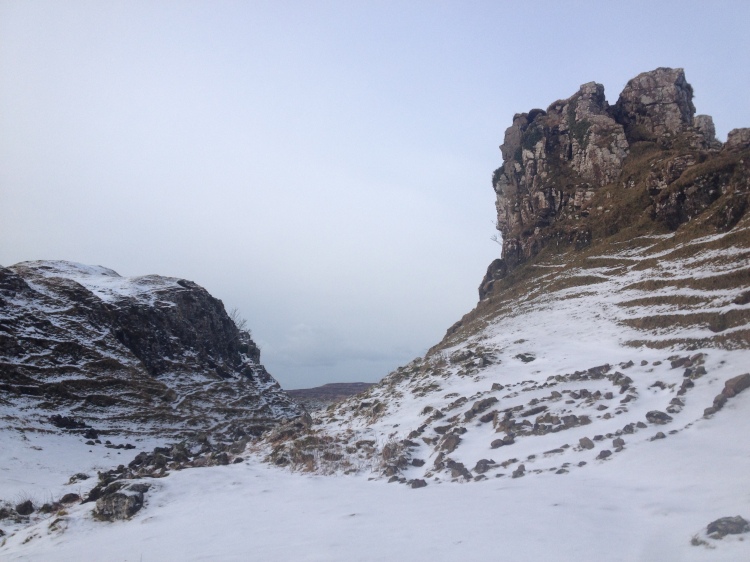 Behind the Fairy Castle. There are stone spirals all over the place here.

When I got up behind the fairy castle I wasn’t on my own.

Tiny bunnies darted this way and that leaving little dotty tracks in the snow. Blackbirds and a robin hopped from rock to rock eyeing me up curiously. A stranger on their patch!
Even with my new company it remained silent yet as I wandered further I recognised the sound of running water.

I followed it and found a little three-tiered waterfall.

Taking my gloves off I cupped my hands under the flow to take a drink. The water on Skye is such a treat, it’s sometimes worth scaling a massive hill for that alone (it must be high-up to limit the risk of contamination by run-off or dead sheep!)
This was amazing; the coldest, clearest water you could imagine. There really is nothing like it. I gulped it like someone who’s drunk far too much wine and woken up in the morning with a mouth like a desert. I should’ve bought my flask with me.

A bird of prey appeared out of the crags and swooped past me. Though it’s gone before I can identify it.

Then the silence is broken by some shouting and a buzz. A flurry of sheep, almost hidden against the snow, come trotting en-masse over the horizon followed by a farmer on a quad and a couple of collies.
I watch him in admiration as he artfully steers the sheep across the hillside (I tried to chase a single cat out of the house the other day and it was almost impossible) until he’s disappeared out of sight. The noise trailed off only to be replaced with a familiar baa-ing.

Sliding down a snowy slope on my backside (on purpose, great fun!) I noticed a procession of sheep making their way along the ridge in front of me.
They’re such funny animals… whenever I go walking on Skye I feel eyes on me, if I look around there always seems to be a sheep somewhere, watching. It would be quite creepy if they weren’t so characterful!
These ones hadn’t noticed me yet, they seemed quite preoccupied.

They were far too busy to bother with me today so I slipped past them and slowly made my way back towards the car. I made sure that the radio didn’t come on when I put the key in the ignition; I couldn’t bear it breaking the peace.

It’s a strange place, the Fairy Glen. I can see exactly why it’s called this. Obviously the solitude and snow was responsible for the exaggeratedly hushed, peaceful atmosphere but there’s definitely a magical feeling here -I can’t quite explain it.

If we get another blue-sky day this week I’m going to come back with a picnic and a book (If it’s still snowy I’ll just wear salopettes and bring a flask of soup). This feels like a wonderful place for contemplation.
With so much wildlife it also feels like one of those places that comes alive when you just sit for a while and look.

9 thoughts on “The Fairy Glen”