I’m quite a keen ‘foodie’ and the ethics of food production play a big part in my life. Over the last few years I’ve been on quite a journey in learning about where our animal products come from and my diet is constantly evolving to reflect that.

If I explain my eating habits here I’d be writing you an essay. Maybe I’ll write about it another time.
(For example, I don’t eat fin fish because of my views on industrial fishing and fish farming but I will eat it if I ever manage to catch one. I’ll eat a creel-caught prawn but not a dredged one. I’ll eat mussels to encourage bivalve farming. Etc, etc, yawn, yawn…) 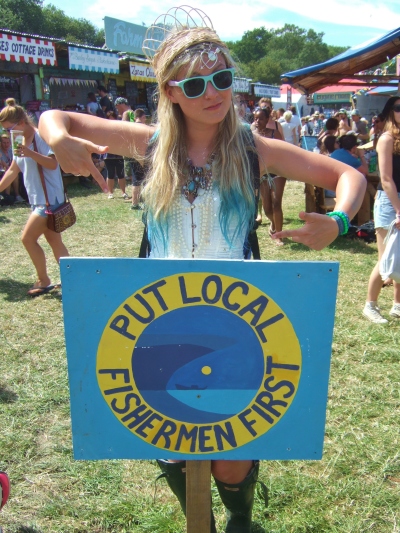 I loved Greenpeace’s overfishing-themed field at Glastonbury this year

Ultimately, my main food/life goal is to only eat animal products that I’ve reared/caught/grown myself or that I’ve seen reared/caught/grown. (I’m actually almost there but since I don’t have any animals it’s more that I’m just defaulting to being a vegetarian or vegan!)
With this in mind, coming to a place like Skye which is so rich in wild natural produce was incredibly exciting. I could finally start to forage for more than just blackberries and wild garlic.

The wild food world is now my hand-dived non-native oyster.

Some of my favourite foraging books

Despite reading all the books and doing the research I’ve actually spent very little time foraging. For no reason other than that I’ve just not really gotten round to it.

However, when I did actually take my first steps into the foraging foray it didn’t go quite to plan…

I was down at Flodigarry looking for fossils at low tide when I noticed how many big, fat winkles there were all over the rocks. For anyone who doesn’t know, winkles are little dark brown gastropods commonly found on rocks at the seashore. They’re actually a distant relative of the regular garden snail.

(There’s an advert in the West Highland Free Press that’s simply a phone number with the words ‘LARGE WINKLES WANTED’ above. It says something about my maturity level that this still amuses me)

Anyway, I spotted these winkles as a perfect introduction to my new foraging hobby. The great thing about these being that they’re easy to identify, they’re relatively safe whatever the water quality and, importantly for me, they’re not exactly difficult to catch!

So I picked the healthiest-looking ones off of the rocks and plonked them into my saltwater-filled water canister.
Once home I collected a bowl of seawater from the bay to purge them in (this is the process of putting them in clean, clear water for a couple of hours to let their digestive tracts clear of grit and sand. Delightful)

Whilst I was down there I picked a few handfuls of bright green, stringy gutweed. I was yet to try it but it’s apparently one of the best seaweeds to use raw in an Asian-style salad.

Back in the kitchen I plopped the winkles into the clean water and set it aside whilst I got on with other things.
I got out the pans, made some garlic butter, put some white wine in the fridge, turned the oven on to warm some bread.
I checked on the winkles. Little black antenna were beginning to emerge from the dark grey shells.

I decided to a bit of washing up.

As I put a mug on the drying rack it bumped the winkle bowl. The little snails, now fully emerged from their shells, flinched.
I caught the movement in the corner of my eye and peered into the bowl.
I gently tapped the rim.
They flinched again, their tiny little antenna drawing back in nervously then slowly peeping back out to make sure the coast was clear.

I couldn’t do it.

Within a couple of minutes I was in the car on the way to the bay with the bowl of winkles splish sploshing on the seat next to me (I have no idea why I decided to drive, it’s literally just a few minutes walk to the water. But that’s nothing to do with the story…)
Hugging the bowl to my chest I picked my way over the rocks to the shoreline, splashing myself as I slipped on the seaweed.
At the water I took 5 at a time and placed them carefully into different crevices and pools… Free Winkle!

Back in the house I put the pans away, threw out the garlic butter and made myself a cheese sandwich. 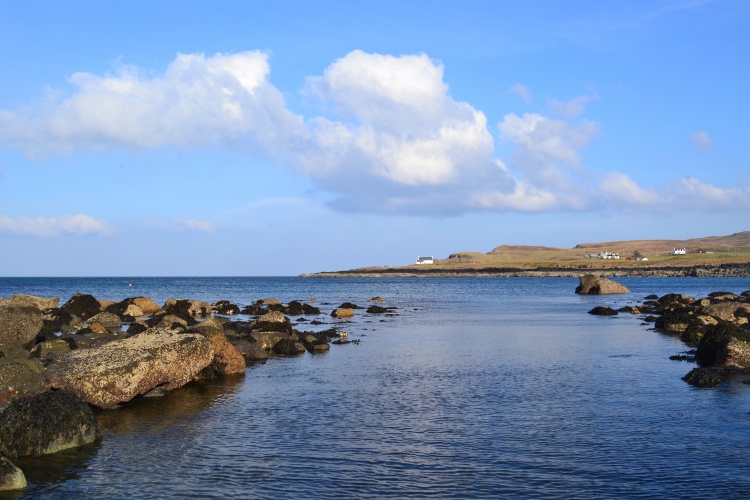 I’ve had winkles before but I just don’t like them enough to kill about 30 in one go just for the fun of learning to forage. I doubt I’ll ever have them again actually, it’s not really worth it.
It’s funny, I’ve shot a deer on a stalk and was fine with it but I couldn’t do this. It’s not that enjoying eating venison is worth killing for and garlic butter winkles aren’t, I think all species deserve to be treated equally (and actually, I’m beginning to think that nothing’s worth sacrificing just for a plate of food now). Maybe it’s that the hind was in too poor condition to last the winter and was going to be culled anyway, the winkles weren’t of course…
I don’t know, it’s something I need to work out myself and it’s definitely a post for another time.

What I do know, however, is that there are about 30 slimy little incomers to Kilmaluag Bay who have a strange story to tell about a Big Day Out.

6 thoughts on “The Failed Forager”