At a whale rescue training course in Ullapool -recruiting Rob as another ocean warrior!

Well, it was tough. The toughest thing I’ve ever done. In the short programmes you think you see people’s dark sides; they haven’t shown the worst of it.

I made some lifelong friends, I built a Hobbit House and lived in it with a robin and family of voles, I created 7ft sculptures, I became matey with a massive (and sometimes terrifying) Tamworth pig.

Hmm, have I forgotten anything? Oh yeah, just one other thing… Vet Rob.

It’s been really heartening (and kind of weird) to find that people are interested in our relationship.
Obviously, it’s something I could talk about forever so, for anyone wanting to know a little more, here’s a few thoughts on the Eden couple that got away..! 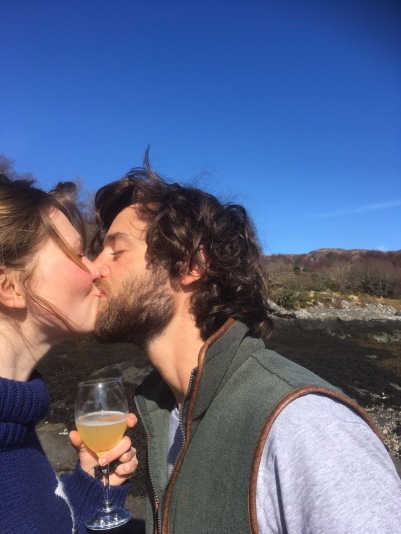 Our first day together on ‘the outside’!

It was pouring with rain, we were huddled in the stinky straw of the pen, soaked through, and Rob was showing me how to bottle feed a kid goat.
Poor little Monty was the runt of triplets, a tiny tangle of knobbly knees and white fluff, he was so hopeless he couldn’t even suckle.
I watched Rob pick him up with these massive strong, rough-looking hands and nurse this funny little creature so softly and so lovingly… well, that was it for me. Hooked.

So that was it, we picked up momentum and he became my best friend.

Big softy! (He’ll go mad at me for putting this on here…)

That’s not to say that we didn’t row like cats and dogs. My goodness, we had some explosive arguments in there!
When you’re in a confined environment and you’re stressed, tired, hungry and anxious you see the worst sides of each other very quickly.*
Still, we stuck by the motto, ‘If we can get through this, we can get through anything’

And there was a lot to get through. As you’ll have seen if you watched last night’s programme, in early December Rob exited the project.

Looking back, we’re both pleased that we left when we did and are confident that the decisions we made at the time were what was right.
Rob is an incredibly thoughtful guy and he struggled for a long time with the boys’ attitudes to the animals and one boy who had a particular problem with me.
He only stayed as long as he did because I’d always persuaded him to persevere. But, in the end, it was getting him down deeplyand he needed to go.
Of course, I was devastated when he left without a goodbye but I understood it completely.

For me, I’m pleased that I stayed.
They may have tainted the experience but I didn’t want them to ruin my opportunity like they had done for Rob. Stubbornness maybe. Don’t let them win. It might look like I’m wearing glitter, but I think if you look closer it’s grit.
Somewhere deep down I knew we’d both be fine.

Reunited on the decking

Fast forward 4 months and we’re out.
On my first day of freedom Mum rented a beautiful house down the road from the Eden site in Ardnamurchan, the first part of her expertly-coordinated plan to help me gently readjust into the ‘real world’.
We pulled up to the drive and I saw through the window a curly-haired figure standing on the decking looking out to the loch.

I’d never seen him in ordinary clothes before. I thought he looked like a rockstar.
He’d never seen me without all the ingrained dirt (and funny smell)!

He met my Mum and, later, the rest of the family. I often daydreamed in Eden about seeing the people I loved most together in one room.

Rob and the Tunn clan on Armadale Pier, Skye

A couple of weeks after this we’d travelled to Brighton for our one-year anniversary.
I don’t think there are many couples who can say that the first time they ever sat down for dinner together at a restaurant also happened on their first anniversary! It’s been surreal.

Rob’s now found work near my cottage on the Isle of Skye and I’ve got to be his vet’s assistant on call outs around the hill crofts of my lovely little island (once things have calmed down a bit I’ll write about them here -it was a bit like jumping into a tale by James Herriot!)

It was incredibly hard watching last night. It’s taken months for me to piece myself back together and it’s nerve-wracking to relive certain things. Rob has found it tough too but has been patient and understanding.
But for all the shit that happened (and there was a LOT), I’ll always be thankful that I came home with the best souvenir!

Being idiots on holiday in Santorini

Before Eden it had got to the point where I had the perfect life but I lived it alone.
My main relationship was with nature and the ocean and I had come to terms with the idea that I might not find a partner, it was sometimes lonely but it was okay. A life with gazillions of rescued animals would do.

So I never expected to return with a boyfriend, let alone someone as lovely as Rob.
I don’t want to pinch myself in case it’s not quite true and I still feel a bit guilty in case I don’t deserve him.

It’s a whole new life post-Eden, though our shared love of all things 4-legged means that I still might end up with those gazillions of rescued animals… 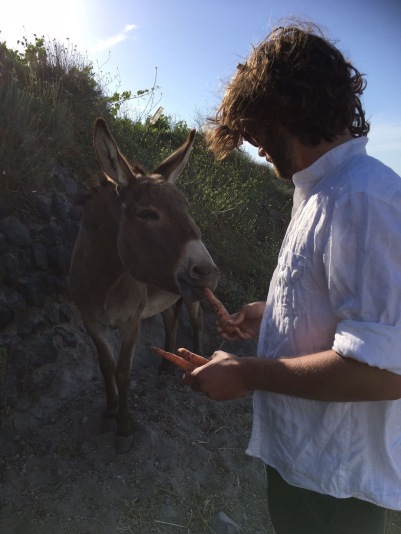 Eden (if you can bear to watch a load of shouting and me ugly crying) is on Channel 4 at 10pm tonight.

*And not just in terms of personality… If a man can still love you when you smell like wet sheep, have a smear of pig poo on your cheek and snot everywhere because it’s too cold to feel it running down your face -well my friends, I think that’s a keeper! 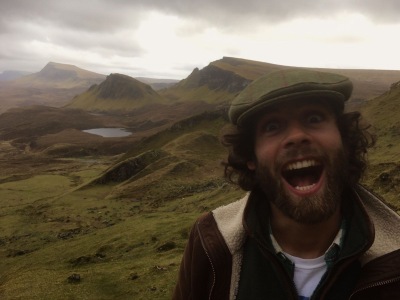 He seems to be enjoying Skye so far…

10 thoughts on “Eden: the vet and the artist”