On Friday I revealed my upcoming project, 82 Islands, on social media. The positive response was overwhelming.
Of course, I’M dead excited about it, I just hadn’t expected others to be too!
Combining my love of islands with a Leave No Trace message is something that’s far too fun for me to seriously call it a ‘challenge’ or ‘adventure’ but I’m looking forward to sharing it all with you as I go.

Here’s what 82 Islands is all about… 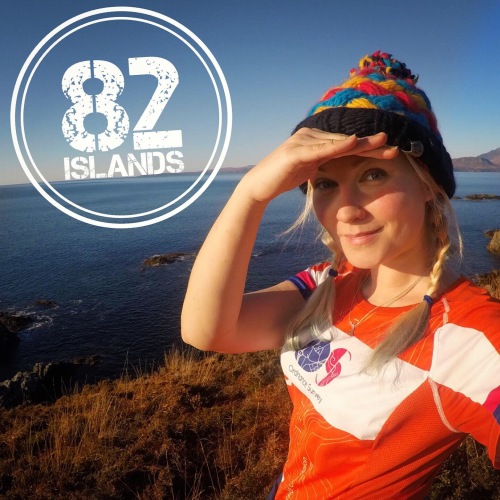 I’m feeling restless.
It’s now been a whole year since I spent six weeks on the uninhabited Shiant Isles and two years since we completed a year of living off-grid in the woods.
Definitely time for another project.

It’ll be no surprise to hear that I have a fascination with islands.
After all, I decided to relocate to Skye, leaving my family and friends a 13-hour drive away. It’s not always easy but I think it’s worth it.

Why are we drawn to islands?

Is it the proximity to the sea and the way living by water affects us mentally? Is it the idea of being solitary or in a closely-knit community separated from wider society? Or could it be the most basic thing of all where, through media culture, we’re conditioned to associate the idea of an island with ‘paradise’?
I suspect it’s a combination of the above plus many other things.

For me, there’s also the urge to get to know these places. To meet them. To learn their personalities. Because the most brilliant thing is that each and every Scottish island I have ever visited has a completely individual character.

This was something I became fully aware of on my Shiant Isles castaway trip last year.

Even this little archipelago of relatively small islands showed that each one had a completely different nature.
The Gaelic names of the islands are Eilean Mhure (Mother Island), Garbh Eilean (Rough Island) and Eilean an Taighe (Home Island).
These correspond to the different characters of each… Rough Island is high and craggy. Mother Island is a fertile grassy plateau holding the possible remnants of religious buildings. Home island is, unsurprisingly, where the last human settlement was. 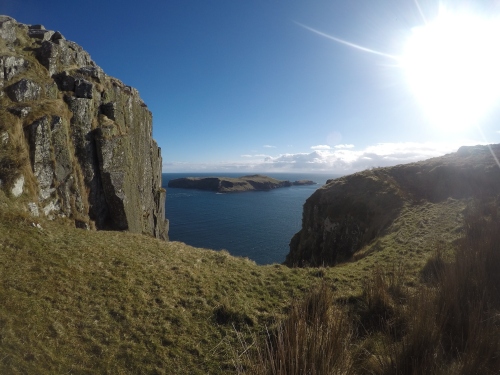 From the scrubby hills of Rough Island (Garbh Eilean), looking over to the fertile plateau of Mary Island (Eilean Mhure)

More well known is Lewis and Harris. They might be one land mass but they’re two distinct entities; Lewis with it’s evocative, expansive peat moors and Harris with those famous ice white beaches.

Each island has it’s own specific mix of flora and fauna, geology and history.
This is part of my attraction to islands (in addition to seeking solitude amidst nature, of course) and is why getting to know just one isn’t enough.

BUT…
There’s a responsibility in spending time in such unique natural places.
Especially for those of us who broadcast our experiences whether that be through writing, photography or social media. 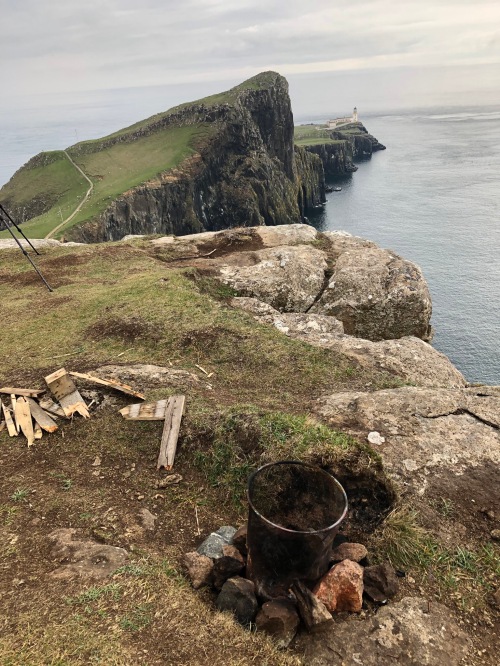 Sights like this at the iconic Neist Point are becoming more common and pose a wildfire threat as well as looking ugly and making the rest of us really pissed off!

There’s a dichotomy going on between the way we interact with wild spaces.
Whilst it’s important that we promote things like getting outside so that people can connect with the landscape and want to protect it, there’s also a downside… more footfall means more erosion, litter and other damage.

Seriously people?! (Taken at the Falls of Falloch)

We could never close National Parks or warn people off visiting the Hebrides but what we can do is educate people to care for them properly.

Because of this I’m also going to use this trip as a way of spreading the Leave No Trace ethos. It’s something that’s close to my heart as Skye is an island that struggles with irresponsible campfires, rubbish left by roadsides and lack of loos.
I want to make sure my visits don’t negatively impact the islands and encourage others to follow suit.

More than that, I’d love it if we all started following something I’ve heard of many times in regards to staying in bothies:
‘Don’t just leave it as you found it. Leave it better.’

‘Leave nothing but footprints…’

Last autumn Ordnance Survey and Sheffield University created a poster of all of Great Britain’s largest islands.
It’s a really cool image where they included all islands over 5km square and charted their dimensions, length of coastline and population (if any).

Like a lot of people, I saw this and thought, “That’s awesome! I’d love to visit all of those”
As time went on, the idea never really left me and so here we are!

Over the course of the year I’m going to be staying on all 82 of Great Britain’s largest islands.
The trip will be supported by Ordnance Survey and #GetOutside but it will be self-funded and I’ll be planning my journeys to fit around my work (and when I can afford to travel!)

I’m lucky in that Skye is pretty much in the middle of all the islands.
71 of them are in Scotland, England has nine and Wales has just two.
…I think this might be the only time that Skye has ever been in a convenient location!

My aim will be to get to know these places. To meet them; their people, their nature, their history..
It might not be as extreme as some of the things I’ve done previously but it’ll still be a big undertaking and on each island I’ll be doing the following things…
-At least one night bivvying.
-A mini beach clean.
-A wild swim.
-And the creation of an artwork. Probably a sketch but I’ll see where the inspiration takes me!

…It might sound like a lot but it’s worth noting that a sea swim in Shetland in January would be a very quick thing!

The emphasis of each visit is to enjoy the islands responsibly and mindfully; to gain a little bit of familiarity with the individual character of the island rather than take part in fast tourism or just ticking a name off a list.

For once, this will be a more social trip (not just hiding away like a hermit each time, though I might do that once or twice on the uninhabited ones…)
I’ll be inviting others to join me along the way and hoping to meet some local residents as I go. I’m especially keen to invite camping newbies or people who might not have the confidence to start alone.

Leave No Trace bivvying: still a better view than most hotels

We’ll see what happens… I have a feeling that this will evolve and adapt as the year progresses!

If anyone reading this feels like joining me or has any suggestions of things to do or people to connect with on each island please let me know.
I’m still working out a few security protocols but watch this space for opportunities to join in as I’ll be posting those here too.

I’m also still open to sponsors so also give me a shout if you think your brand would make a good fit for the trip!

Okay this photo is half excited, half frozen but it proves my point about quick swims at least!