I bought a new set of 50 Crayola colouring pencils a couple of weeks ago to work on some illustrations and I haven’t been able to put them down since. New art materials are a bit like sweeties to me and if fancy art pencils are high-end chocolates then Crayola pencils are Pick n’ Mix.

So here’s a little doodle I drew this week of my new home on Skye (and all it’s current inhabitants!) 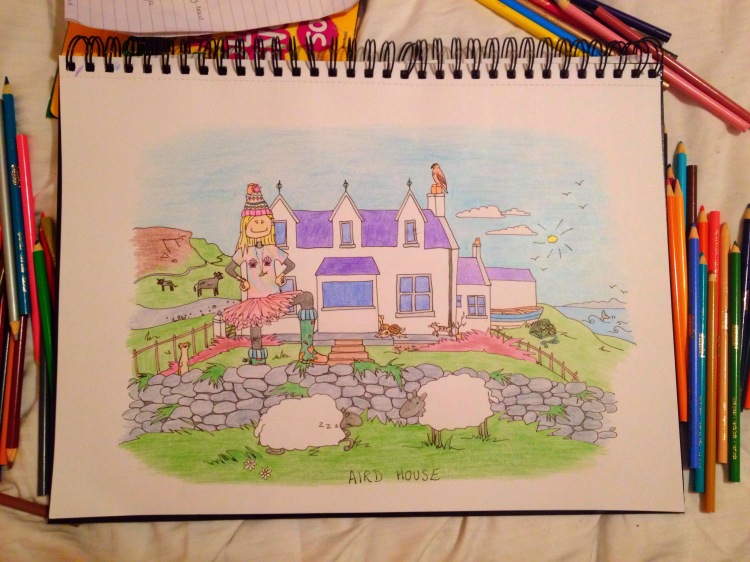 My wee cottage and me

I’ve been trying to learn a bit of the native language whilst I’m up here.
I’m desperately bad at it, there’s something about Gaelic that seems more tricky to pick up than other European languages. Somehow the words wont stick to my brain cells. The ultimate in linguistic Teflon.
It’s quite a gutteral language, very different from French or Spanish, and apparently German visitors find it easier to pick up than the rest of us. It’s a funny one to hear spoken (I find myself stretching to try and hear familiar words) but it’s hauntingly beautiful when sung.

The signage around Skye is a helpful way to learn a few basic pronunciations as the Gaelic place names are usually written in green above the English ones. I love seeing how some of our everyday Anglo words have been integrated into the Gaelic language with terms such as ospadal (hospital) and oifis a’ phuist (post office).

But there’s one Anglo-Gaelic word that I know particularly well because I think it’s quite charming. First spotted in the Co-op in Portree, the sign for the confectionery aisle…
Suiteas.
Perhaps I’m easily pleased but I love that.

So I’m back in Portree having seen three gorgeous cottages, all completely different… 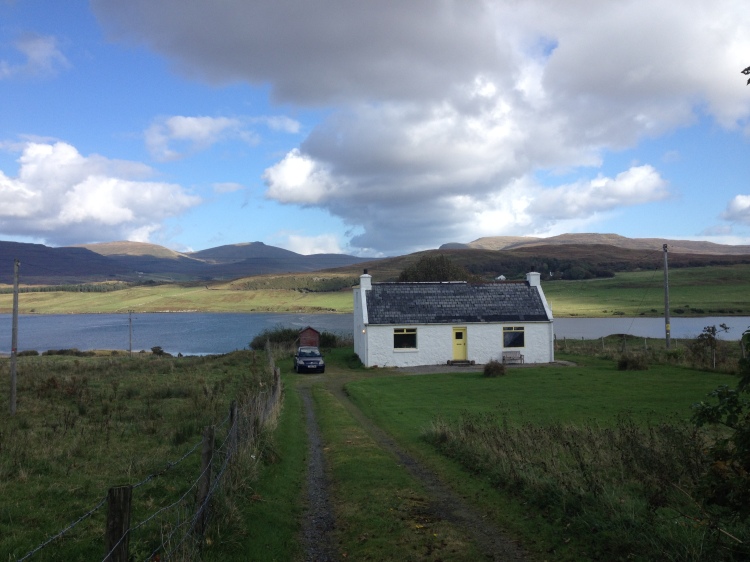 My third cottage: Cute and practical

A long let shouldn’t normally be such a big decision but this isn’t just a holiday home to me. When the winter gets dark and stormy I want a refuge where I can curl up in front of the fire with a book whilst the wind whistles through the dark Cuillins behind. Or somewhere where I can run through the door to a hot cup of tea when the raindrops are pelting so hard they feel like whiplashes and you can’t tell what’s rain and what’s sea spray.
Yes, it’s completely silly and whimsical but it’s a significant part of why I’m here so I wont be apologising for it!

But back in the real world… I’m in a far away place, on my own, with no experience of a Hebrides winter and no 4×4. I suppose I need to be sensible. My head says the third property, or at least the second. Still something in my heart pulls at the first.

There’s only one person to turn to when a girl is in a quandary. I call Mum.

Well, I don’t actually call Mum because this is Skye and there’s NO PHONE SIGNAL ANYWHERE!
But I do manage to locate some Wifi and get hold of her via Whatsapp. I tell her about the place I’ve just seen, how handy and how near it is. I tell her I can’t decide. What do I go for? Do I choose romance or practicality?

…And this is one of the thousands of reasons that I love my Mum:

So I emailed the owner, Patsy, and Kilmaluag is to be my new home. EEEEEEEK!!!

A big, old fashioned cottage with deep, fuzzy brown carpets, retro patterned wallpaper and a particular kind of charm.  with a view that stretches out across the Atlantic and the Norwegian Sea towards icy Svalbard (that little island next to Greenland). Apparently there are also dolphins and porpoises that often visit the bay. Though I’m trying to ignore the stories I’ve just been told about fishermen being swept off the headland and out to sea, never to be seen again (no clifftop walks for me then!)

Toto, we’re not in Kanas anymore!

A couple of minutes drive from the first house I viewed in Duntulm I stumbled upon an intriguing little cafe. Wood cladded and grass roofed, it was strikingly modern and it sat as a little baby building next to a larger one which appeared to be a private home.
I swung in for a cup of tea and to calm down after catching a glimpse of what may have been my new life (eek!)

What I hadn’t expected to find was a warm little cafe with a hissing coffee machine, shelves stacked with artists materials and a counter piled high with baked goodies. Two smiling ladies stood behind the plates of cakes and as I sat down we got chatting.
One of the ladies, Indi, built the structures with her partner Bec, who wasn’t there but whose art hung on the walls (beautiful blue, misty, abstract paintings, I had to remind myself that I couldn’t afford any now but I made a mental shopping list for later). I later learned from another customer that this was a Grand Designs build. Not surprising when you see how stylish and sensitively done the buildings are. 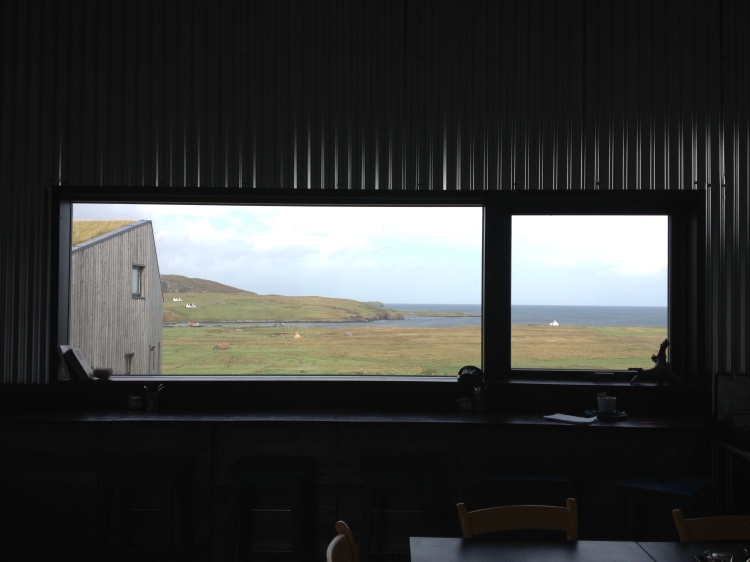 The view over Kilmaluag Bay from inside the Single Track cafe.

There were a handful of customers that came into this tiny little cafe whilst I was there (note that this is in the remote North of the island, not busy Portree town). The first two were a couple who I’d sat next to the previous evening at the Edinbane Inn, about 45 mins Southwest. They joined in the chat and told us about their home-laid duck eggs. Then came a chap called Matt, I recognised him as one of the St Kilda to Skye rowers whose charity ball I was going to the next night. He also happened to be the co-founder of Skye Adventure, a fellow Surfers Against Sewage supporter who I’d been emailing for weeks about a beach clean but whom I’d not met yet. Lastly, as I asked Indi about her partner’s artwork I found that Bec had painted with my talented Skyeworks colleague, Marion.

Inside the Single Track cafe with tea by Eteaket, Moleskine stationary and artworks by co-owner, Rebecca Waterstone

Everyone here seems to know everyone else. I was chatting to Liza, my boss at the gallery about it and she told me a story about her mother who is relatively new to the island. She said that her mother used to find it frustrating that she couldn’t pop to the shops without spending half an hour in conversation but she then came to realise that, unlike in other places, here you are somebody to people and not just another person on the street. It really resonated with me and I think that might be part of what makes this a special place to live. Of course there are people who keep themselves to themselves but the people who I have met so far are overwhelmingly friendly.

Another exceptionally warm and kind person is Lorraine, the other lady working at the Single Track cafe yesterday. Not only does she make the most delicious brownies (delivered by bus!) but she also happened to have a house available to rent in the area and it was so close that she could point it out through the cafe window.
Lorraine kindly lent me the keys and I pootled off to have a look at her property, the charmingly-named Willie Macleods house. It’s a nicely-sized crofters cottage and the first thing that hit me was the colour, that same Farrow & Ball green that most of our village doors seem to be painted in in Chiddingfold -I felt quite at home! The house was as lovely as it’s owner with nice decor and everything I might need.

I returned the keys to the cafe and left with my mind in a muddle. Not even a muddle, a big buzzy scribble. How on earth do I choose between the two completely different North End cottages? Lorraine and Indi had certainly sold the location to me, through their friendliness as much as their explanations of what the area has to offer. I had another viewing to do the next day. Hopefully this one will make up my mind but it’s going to have a hard job catching my heart as strongly as this place.

Settled in a lovely B&B (thanks to Nat & Emma) it’s now time to start looking for a more permanent place to stay. With peace, quiet and proper wifi I can take my time and look for somewhere really special. I’ll be working from home for most of the week so it’s important to me to find somewhere just right, however long it takes.

Okay, the third one might seem pretty hopeful but on Skye a view over the sea or a loch is the norm, not an expensive luxury.

I had a bundle of offers to work through after putting an ad out in the West Highland Free Press. One that stuck out most was one offered by a lady called Patsy who was so friendly on the phone that I wanted to live in her house just to have her as my neighbour!
Her house in the remote North End area house ticked all my boxes so today I agreed to drive over for a viewing.

The drive into Duntulm, the Northernmost point on Skye

The drive up the left hand side of Skye along the Trotternish Peninsula was spectacular. It’s the kind of scenery that you couldn’t even imagine exists in the UK. With landslipped cliffs on one side and a vast expanse of ocean on the other it was almost impossible to keep my eyes on the wiggly, winding tarmac.

As I neared the far North the coastal side of the landscape flattened and the trees started to peter out (an indicator of very high winds!) Next came the inevitable sheep, dotted on precipitous rock faces, sitting hidden in bushes and trotting down the middle of the road. Very Skye.

Patsy met me at the house and she was even more lovely in person than I’d imagined (she even put out a tea set for me to have a cuppa whilst I looked around!).
The house was old fashioned but had lots of little rooms where I could close the doors and get cosy. There’s no phone or internet. The carpets were thick and fuzzy, the main one being a dark brown shaggy number. But, you know what, that didn’t matter. There was something about this place, a charm.
I have no doubt that a lot of that charm was to do with the view from almost every window. It may often be grey and drizzly on Skye but when the sun comes out can you imagine waking up to this every day….

When I left I was buzzing, literally shaking. At some point during the viewing it had hit me. I’ve left everything at home and come up to a wild, remote place that’s completely new. But it wasn’t, isn’t scary. It’s adrenaline and excitement and… adventure.
With being busy with accommodation and gallery work in Portree I hadn’t had a chance to feel the enormity of my move. So it arrived, and it’s still kind of here this evening. I’m just so EXCITED!

This wasn’t the end of my house viewings today but this’ll do for now. Just down the road from Patsy’s house I stumbled upon the Single Track cafe and gallery and a couple of wonderful women, Lorraine and Indi. But that’s a story for tomorrow….